Surveillance can be used for a number of case pursuits.  It can be employed for a criminal as well as a civil case.  An example of a criminal case would be a situation where a company is losing inventory through shrinkage.  Our services can be employed to watch a loading dock after hours in order to catch employee theft.  A civil 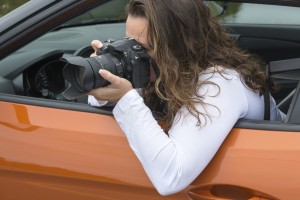 investigation example would be a health insurance fraud.  In this situation, the subject would be watched and videotaped involved in activities restricted by his claimed injury.  Another example of a civil investigation would be a marital issue where one party is unfaithful to the other party.  Surveillance video can assist in a number of different ways in this case.

Surveillance can be used to track the patterns of children suspected of hanging around the wrong crowd.  This can bring insight for parents who are concerned about their children and their wellbeing.

Surveillance can start out with the use of an electronic tracker where minimal time and money are required to operate and retain data.  Use of a tracker can save the client a great deal of money, if the situation is conducive.  If the tracker shows a pattern of behavior to be of interest, then steps can be taken to document it via photographs and/or video.

Agent Garrett was a certified FBI Mobile Surveillance Team – Armed (MST-A) Operator and for three (3) years he followed some of the most dangerous subjects in the state of Georgia.  One operation entailed the surveillance of a group of armored car robbers that shot and killed a guard execution style.  Another was the surveillance and arrest of four home grown terrorists in Toccoa, GA.  Other surveillances included drug dealers, prostitution rings and public corruption cases.

Surveillance capture is done with the latest in camera technology.  All surveillances are documented in a fashion that lends itself as evidence for court proceedings.